Message of His All-Holiness the Ecumenical Patriarch Bartholomew for the Feast of the Indiction, September 1st 2022 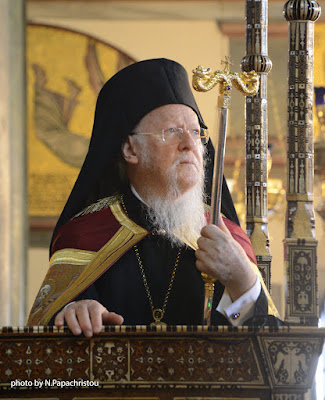 To the Plenitude of the Church

Grace, Peace and Mercy from the Maker of All Creation

Most reverend brother Hierarchs and beloved children in the Lord,

As we enter, with God’s blessing, the new ecclesiastical year today, we honor with the Feast of the Indiction the “Day of protecting the natural environment” and offer glory and gratitude to the Creator of all for the “great gift of creation.”

We proclaim once again with all our heart that the respect for creation and the constant concern for its protection belong to the core of our Orthodox identity as one of its most precious elements. The Church recognizes and teaches that the cause of human alienation from the “very good” creation and one’s fellow human beings is the “alienation from God.” It boldly reminds us that there Is no authentic freedom without the Truth and outside the Truth, which is the power that truly liberates. “Know the truth, and the truth will free you” (John 8.32).

For over three decades, the Holy Great Church of Christ emphatically and dynamically promotes the eco-friendly message of Orthodoxy through its diverse initiatives. September 1, 1989, will forever signify and symbolize the commencement of a movement that produced much fruit, raised awareness about the spiritual and ethical roots and parameters of the destruction of the natural environment, mobilized individuals and institutions, inspired the rest of the Christian world, highlighted the way of responding to this great challenge – a way that passes firstly through an understanding of its connection with the crisis of human freedom and the need for radical change in mentality and conduct with a view to creation, and secondly through a common and universal action given the global dimensions and tragic consequences of the ecological destruction.

An invaluable legacy for the future lies in the many important writings on the field of theological ecology, among which the work of the professor and academician, His Eminence Elder Metropolitan John of Pergamon, retain a prominent place. An inexhaustible source of inspiration will also be found in the presentations of the nine water-borne international symposia, which hosted renowned specialists and scientists as well as representatives of the cultural and spiritual worlds. These texts are especially beneficial for environmental learning, which has carved out a significant place in contemporary education. As it has rightly been said: “In the future, an education without ecological orientation will be a parody of education.”

Sustainable development is a one-way street. It will secure ecological balance in the present and constitute a guarantee for the future, but it has its conditions: ecological economy, changes in agricultural and biomechanical productivity, the production and use of energy, the movement and transportation of goods, new models of consumption, and so on. Unfortunately, good intentions, agreements and proclamations often remain theoretical, merely “big words,” without any impact on action, “superficial injunctions,” as it has been written. Humankind has not learned from the consequences of climate change, the destructive fires, heat waves, and floods, the rapid reduction in biodiversity, the pollution of the atmosphere and seas, the deforestation and social repercussions of the environmental crisis, above all revealed in the mass migration for ecological reasons. Humanity continues to be deluded about the innate capacity of nature to protect itself and overcome human-induced damages. We know, and yet we continue to act as if uninformed, suppressing the truth that with regard to its relationship to the natural environment, our modern technocratic and econo-centered civilization does not comprise progress, since the greatest devastation of the natural environment has taken place in our own time, and age where science and economy prevail. Climate change is an immense destruction caused by human irresponsibility and the impasse of our model of organization in the life of our economy. We only have a future if we understand that the protection of the integrity of creation does not only not comprise a hurdle for economic development, but is the vehicle for real progress.

This year, the celebration of the Day of the protection of creation are accompanied by the sound of weapons in Ukraine, by the cry of the victims of military violence, the bombardment of cities and infrastructures, the groaning of nature and moaning of refugees. Every war is a humanitarian and ecological catastrophe. The ongoing violence, beyond the thousands of human lives, also destroys the natural environment that it pollutes, forcing nations and peoples to return to ways of securing energy efficiency through means that are unfriendly to the environment. Thus, humanity enters a new vicious cycle of destructive impasses, which confirm the saying that homo sapiens to this day continues to behave simultaneously as homo demens, as imprudent and irrational.

Brothers in the Lord and blessed children,

For the Church, the elements of the world – according to a theological formulation – “are not simply utilitarian or useful material for the individual needs of human beings, but they are actions of the Person of the one Creator”. Everything created by God blesses, praises and exalts God to the ages, the heavens declare His glory. This is the message expressed by the concern of the Great Church for the protection of creation. The life of the Church of Christ is a foretaste of all that we expect in the Kingdom of the Father, Son and Holy Spirit. On our way to the Eschaton, the Holy Church offers to the world the Gospel of grace as its guide and the unswerving certainty that evil, in all its forms, will not have the final word in history.

In closing, we wish you a blessed and fruitful new ecclesiastical year, and we call upon all of you, through the intercessions of the First-among-the-saints Theotokos Pammakaristos, the lifegiving grace and great mercy of the creator and redeemer of all, the pioneer and perfecter of our immaculate faith to whom be the glory and the dominion unto everlasting ages. Amen!

Fervent supplicant for all before God